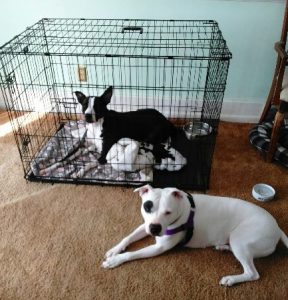 Crate training can take days or weeks, depending on your dog's age, temperament and past experiences. It's important to keep two things in mind while crate training:

Step 1: Introduce your dog to the crate

Place the crate in an area of your house where the family spends a lot of time, such as the family room. Put a soft blanket or towel in the crate. Let the dog explore the crate at his leisure. Some dogs will be naturally curious and start sleeping in the crate right away.  If yours isn't one of them:

Step 2: Feed your dog his meals in the crate

After introducing your dog to the crate, begin feeding him his regular meals near the crate. This will create a pleasant association with the crate.

After your dog is eating his regular meals in the crate with no sign of fear or anxiety, you can confine him there for short time periods while you're home.

Step 4, Part A: Crate your dog when you leave

After your dog can spend about 30 minutes in the crate without becoming anxious or afraid, you can begin leaving him crated for short periods when you leave the house.

When you return home, don't reward your dog for excited behavior by responding to him in an excited, enthusiastic way. Keep arrivals low key to avoid increasing his anxiety over when you will return. Continue to crate your dog for short periods from time to time when you're home so he doesn't associate crating with being left alone.

Step 4, Part B: Crate your dog at night

Put your dog in the crate using your regular command and a treat. Initially, it may be a good idea to put the crate in your bedroom or nearby in a hallway, especially if you have a puppy. Puppies often need to go outside to eliminate during the night, and you'll want to be able to hear your puppy when he whines to be let outside.

Older dogs, too, should initially be kept nearby so they don't associate the crate with social isolation.

Once your dog is sleeping comfortably through the night with his crate near you, you can begin to gradually move it to the location you prefer, although time spent with your dog—even sleep time—is a chance to strengthen the bond between you and your pet.