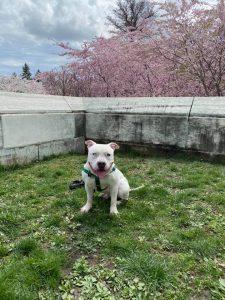 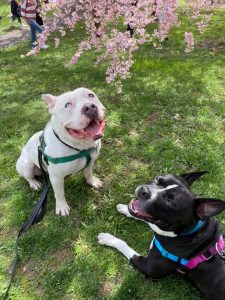 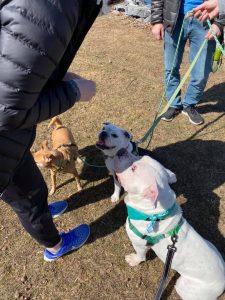 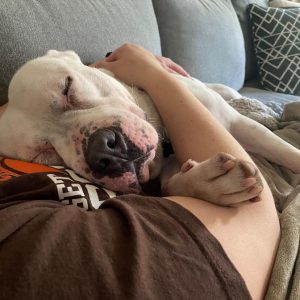 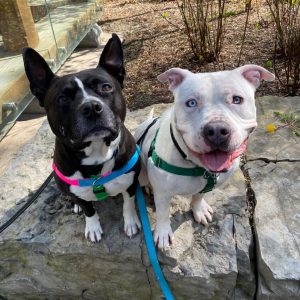 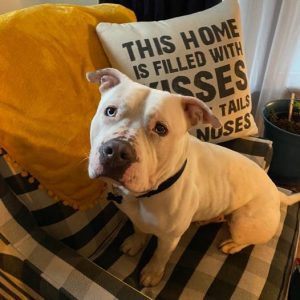 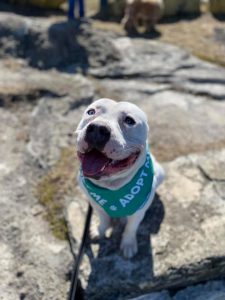 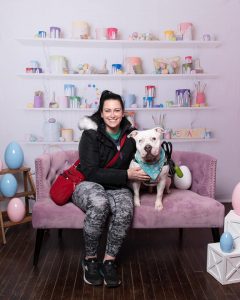 Meet Zeus! Zeus is 3 yrs old and traveled from Corpus Christi Texas to Buffalo in early March after his owner passed away from COVID. His family was desperate for help. Shelters are overcrowded, and if dogs aren’t adopted quickly, they are likely to be euthanized. They didn’t want to see that happen to Zeus. Through some mutual connections, they reached out to our rescue partner – Flights to Furever – in Texas for help and Queen City Pitties scooped him up.
When we got him off the transport, he was so dirty and smelly but SO incredibly happy. He was nervous in the car but happy to eat some chicken. After a couple more car rides, Zeus now LOVES the car and associates it with fun and adventure, we imagine.
After following a two-week shutdown to allow Zeus time to adjust as well to our resident dog, Carlo, they quickly warmed up to each other. They co-exist well and enjoy daily romp arounds and stuffie tug-of-war.
We don’t know much about Zeus’ former life but we know he lived with three Pomeranians, and I joke he has Pom energy. He absolutely doesn’t know his own size. He’s a three-year-old 60-pound bowling ball with legs. Once he gets momentum, there’s no stopping him. Doors everywhere, beware! He enjoys parkouring off them and other household objects like the couch, occasionally landing on top of Carlo.
For the first week, Zeus had a difficult time relaxing. He would come sit on the couch but not lay down. He had to investigate every little noise. He was so overstimulated. Over the next few weeks, he continued to decompress and he’s officially been inducted into our couch barnacle hall of fame. That said, he still has to investigate all the noises, car horns make him go on high alert, and if you get up, he will follow.
Zeus is housebroken if you don’t include the slobber. Because that will be everywhere. We just embrace it, and his forever home will need to, too! When he doesn’t have Pom energy, he brings quite the mix of bulldog and piggie energy. He often snorts when he’s sniffing, excited, or chowing down on some yummy treats.
Zeus likes to look outside the window and bark. He will alert you to garbage crews and more – like snow! His very big head must mean he has a very big brain. He recognizes photos of dogs in our house and barks at them. He also watches TV, and his favorite Bravo show is Summer House. No Bravo? Sorry, you might not be the right match for Zeus. But he might be willing to compromise.
Zeus is crate trained and doesn’t seem to mind having that time to himself. He is dog-friendly and walks well on a leash. He’s quickly learned that “checking in” means treats. He does get excited in new places and will pull a bit but settles once he gets all his sniffies out. He needs someone who will commit to walking him every day because he absolutely LOVES it, and it’s a great stress reliever as well as mental stimulation. It simply makes him happy.
A sturdy fenced-in yard is necessary because Zeus does have escape artists tendencies. We recommend always accompanying him outside.
Because of his size and enthusiasm for life, we don’t recommend super small children. They may get knocked over. He takes treats gently but he does LOVE to chew as well as nibble hands and feet. We have worked on redirecting this to toys and chews, and we’ve seen a lot of success. Unfortunately, Zeus is not cat friendly but can we blame him? Dogs rule, cats drool.
Zeus does tend to parkour off doors and house visitors when he’s excited but he’s learning to be patient in those situations. We always recommend continued positive-reinforcement training.
Zeus is an all-around meatball, lover, and very good boy. If you’d like to learn more about Zeus, please visit his foster’s Instagram page at @carlo_the_pibble.
If you are interested in adopting Zeus, please apply today!