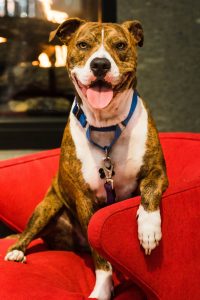 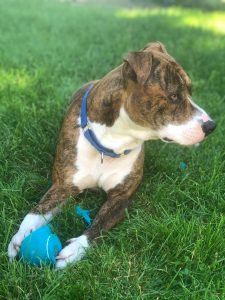 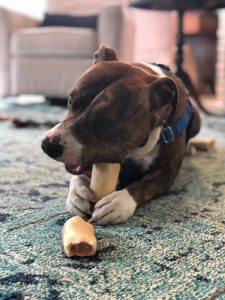 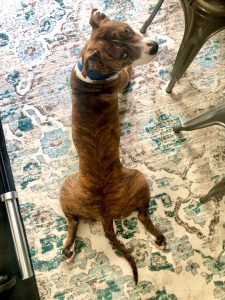 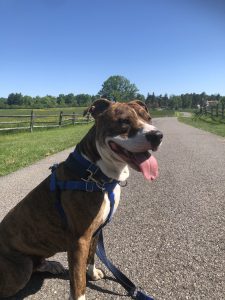 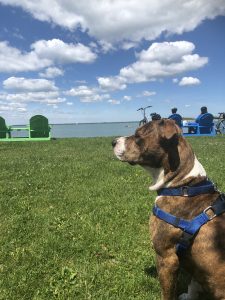 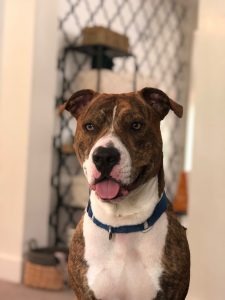 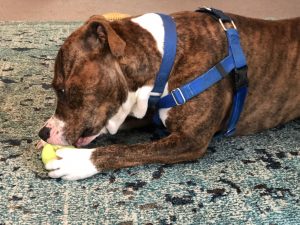 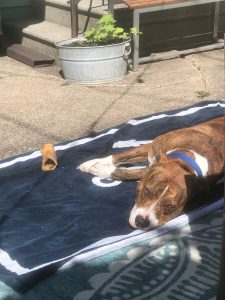 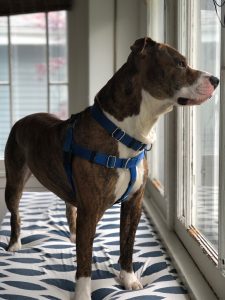 Meet Rudy! Rudy is 2 years old and he’s still such an energetic and curious as a puppy! He has a beautiful brindle coat and piercing brown eyes. If Rudy were an athlete he’d be more of a sprinter than a long distance runner … literally. He prefers multiple short walks a day instead of super long walks especially when it’s hot outside when he lays on strangers lawns in the shade for quick rests from the heat. His foster has tried running with him and he prefers to just take it slow and sniff everything. On said walks he’s never passed a stick or a ball he doesn’t want to take home with him and believe us, he’s tried a few times! He LOVES toys- bones, bully sticks, Kongs filled with peanut butter, but above all – squeaky toys and balls of all shapes and sizes! He can entertain himself for a while with toys, but loves it when you play with him even more. He loves to play fetch or more accurately “keep away” i.e. he does great chasing the ball, but we’re still working on the bringing it back part. He’s very smart and treat motivated; he has “sit”, “lay”, and “shake” down pat, and “stay” if there are no distractions. He sits patiently when you put on his harness for walks and when told to sit and stay he’ll wait at the door until you let him out, and when in the car he’ll wait for you to say it’s okay to jump down. We’re working on “leave it” now. He’s totally house broken and has only had one accident. He still picks a lot of things up in the house thinking it’s a toy, but he doesn’t destroy any furniture or items and once you tell him “no” or take it away from him and put an actual toy in front of him, he’s fine. He’s crate trained with a little coaxing and treats or sometimes you just have to pick him up and put him in there. Once he’s in he’s a total angel and sleeps 8+ hours a night silently and soundly in his crate. When you let him out of his crate in the morning he immediately jumps up on the couch and cuddles with you and falls back asleep while you drink your morning coffee for an hour or two. After dinner, he’s right back up on the couch with you after a long day of running around and playing, and he’ll stay there sleeping next to (or sometimes on) you until it’s time for bed! Rudy is looking for a forever home with active parents and with a totally fenced in backyard (he loves to be outside). He’s lived with other (female) dogs before and the shelter said he was good with most female dogs. With an experienced owner, we feel that Rudy could possibly live with another dog again after a shutdown period and training. We are not sure about cats, but due to his prey drive in the yard, we don’t recommend them. Overall he’s a wonderful, sweet, smart, loving dog who would make a great addition to someone’s family for many years to come. Is that family you??

If you are interested in adopting our boy Rudy, APPLY TODAY!!