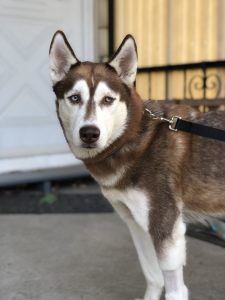 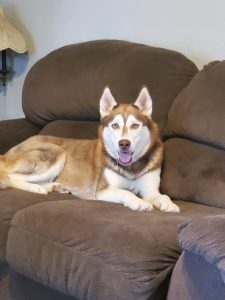 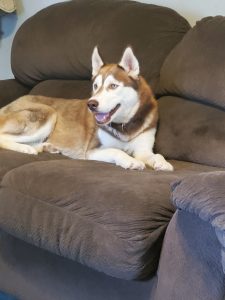 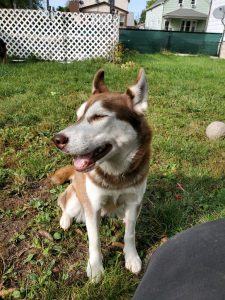 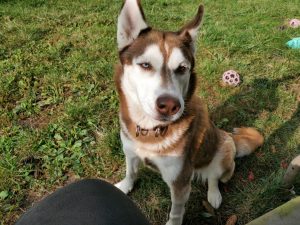 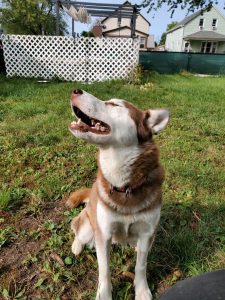 UPDATE: Ruby is on medical hold at this time. She had two seizures within a 4 hr span on Saturday, October 3rd. She spent the night in the ER under seizure watch, but she didn’t have another one. Her bloodwork was normal, so we are told that she most likely has hereditary Epilepsy. She will remain on medications to control the seizures. We will have her on a medical hold for 30 days to see how she does. Dogs who have Epilepsy can have been known to live a normal healthy life, without ever having another seizure as long as they are treated daily with the prescribed medications.

Meet Ruby!! Ruby was recently picked up as as stray in Rochester. She had owners, but they never came to claim her. She’s about 3 years old and 45 lbs – she is a little underweight at this time for her breed and size, so her fosters are working on getting her back to healthy weight. Ruby had a rough few days when she was picked up by animal control. She was laying down and in obvious distress, fading in and out of consciousness. The ACO was on the way to the emergency vet to get her checked out when she had a Grand Mal seizure in the parking lot. She was then transferred to Animal Services the next day where she had a 2nd and 3rd seizure. She has been seizure free since August 26th, which leads us to believe that it was something environmental that was causing the seizures. Ruby has been in foster since September 9th. She is spayed, up to date on all vaccines and she’s house trained and crate trained. Ruby lives with two other dogs and a cat, but she does not “play”, she can just either take them or leave them as long as her person is nearby. She follows her foster mom around everywhere she goes. Now, she is the typical husky when it comes to training, she learns the command, but she does it on her terms, when she wants to, and how she wants to. She goes into a kennel with some coaxing with a treat, but she has also kept her out all night and she didn’t tear anything up. Ruby is very shy and timid, she doesn’t seem interested in playing, or in toys. She doesn’t seem to know how to play fetch in any way, but she will bow and let you chase her around a yard. She is a couch potato. In a yard, she will find the weak spots and slip out if left unsupervised, and as any husky, she like to explore – So a home with a secure fence will be required. She walks perfectly on a leash, she doesn’t pull and stays close by. She has that wonderful husky howl too!! Ruby would do best in a home that has experience with the breed as they can be difficult to train. If you have been looking for a beautiful companion, Ruby is your girl! Apply today https://queencitypitties.com/adoption-application/